New Lucky Dragon Casino To Be Completed This Year 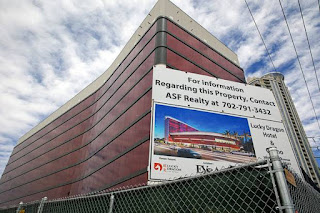 According to a recent Vegas Inc article, "Backers of the Lucky Dragon resort under construction just off the north end of the Strip say the project is fully financed and on track to open later this year."

The Asian-themed casino paused their plans late last year when the city declined to help provide tax increment financing. The Lucky Dragon recently announced they are back on track and plan to have the casino completed by the end of the year.

The Lucky Dragon aims to be the “first casino resort to deliver an authentic Asian lifestyle experience” in Las Vegas, the project’s statement said. Its features will include signs in Chinese first and English second, multilingual staff members and a high-end tea garden.

“We really want to be a — from the ground up, in our DNA — culturally authentic Asian resort experience,” David Jacoby, the Lucky Dragon’s chief operating officer, said in an interview.

Overall, Jacoby said, the Lucky Dragon wanted to revive the idea of a “smaller, intimate, personalized, service-type environment” that “inherently gets lost” at Strip megaresorts. The resort will feature a 27,500-square-foot casino, multiple restaurants serving Asian cuisine, a hotel with 204 rooms and a 4,500-square-foot spa. The casino will emphasize games popular in Asia, such as baccarat and pai gow, and a 1.25-ton glass dragon sculpture will be suspended from the ceiling, according to the statement.

Construction is about 70 percent complete, according to Jacoby.