According to the Las Vegas Convention and Visitors Authority, 3.5 million people came to Southern Nevada in April.  This was a 3.5 percent increase from April of last year.  Nearly ever measure of visitor activity was higher in April than the previous year, except for convention and convention attendance.  For hotels and motels, the average daily room rate was up 1.2 percent with 89.8 percent occupancy, and revenue per available room was up 4.4 percent. 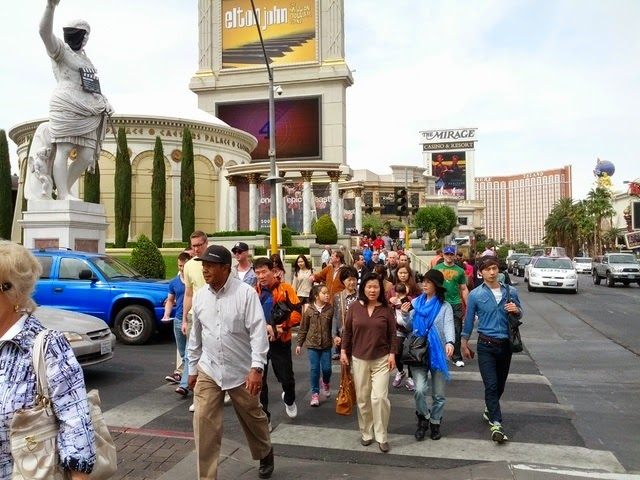 Source: REVIEWJOURNAL.com
at 9:32 AM No comments:

Sellers: It's Risky Pricing High to 'See What Happens'

Have you ever considered pricing your property high just  to "see what happens"?  Of course every seller wants to get the best deal for their house, but over-pricing can lead to several problems.
If you choose a high starting price and gradually reduce it over time - you can be sure that buyers are going to notice.  Even worse, they'll wonder why the property has been sitting on the market for so long.  Considered from a buyer's viewpoint, would you be in a hurry to buy a home that's been sitting on the market for 180 days?  As stated by the RE/MAX article, "You want your home to appear like a deal, not cheapened goods."

The latest hotel-casino on the Strip has taken a different approach from the huge mega-resorts introduced to Las Vegas in recent years.  With just 188 rooms, The Cromwell hopes to customize the experience of each guest with their own luxurious take on a "boutique" hotel.   Adjacent to Caesars Palace, Bellagio and Bally's, The Cromwell sits in a very attractive corner of the Strip.  Managers hope to utilize this coveted space in the most efficient way to generate a high return for parent company Caesars Entertainment Corp.
With distinctive interior design and unique food culture, boutique hotels have become reflective of a more modern, growing base of sin city customers.  Food Network star Giada De Laurentiis has already made The Cromwell home to her first restaurant, which overlooks an iconic Strip intersection and features a $30,000 prosciutto slicer.

The Cromwell marked it's opening with a traditional ribbon cutting ceremony, recorded below:

From atop The Cromwell hotel and casino, see the breathtaking view of the Bellagio fountains from Drai's Beachclub and Nightclub in the video below:
Source: REVIEWJOURNAL.com
at 8:57 AM No comments:

The average rate for a 30-year, fixed rate loan fell again according to Freddie Mac's weekly survey.  The rate decreased from 4.2% last week to 4.14% this week, while the 15-year rate decreased from 3.29% to 3.25%.  This is the lowest average rate we've seen since October of last year.
There are several reasons as to why these low rates aren't doing much for the housing market. According to Mortgage Bankers Association, applications for mortgages have dropped about 10% from a year ago.  Meanwhile home sales have taken a hit due to inventory shortages and lending standards continue to remain strict.
On the positive side, the number of permits to build new houses and the number of new homes being built rose higher than expected in April.  Also, low mortgage rates have allowed more homeowners to refinance their homes on more affordable terms.

Link to the article:
http://money.cnn.com/2014/05/22/real_estate/mortgage-rates/index.html 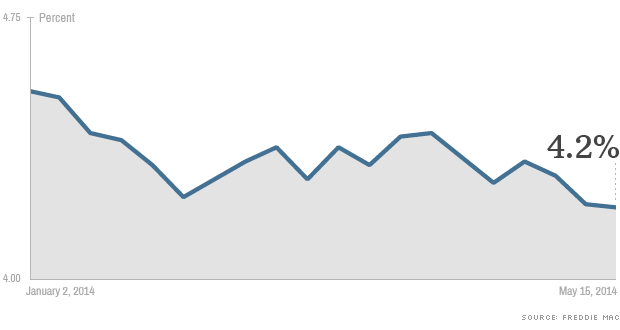 According to a new survey released on Monday, priceline.com declared Las Vegas the top destination for travelers over Memorial Day 2014.  More travel bookings were made for Las Vegas than any other destination this year.  Priceline's top 50 destinations for Memorial Day is an annual list that has kicked off the summer travel season since it began 12 years ago.

Warm-weather destinations dominated this year's top 5 as a result of the predominantly cold weather we've seen across the U.S. this past spring.  Las Vegas took the No. 2 top destination spot for Memorial Day on last year's list, and has been a top destination in six out of the 12 years priceline.com has published its annual list.

Check out the article:
http://www.vegasinc.com/business/tourism/2014/may/19/las-vegas-back-familiar-territory-web-sites-top-me/ 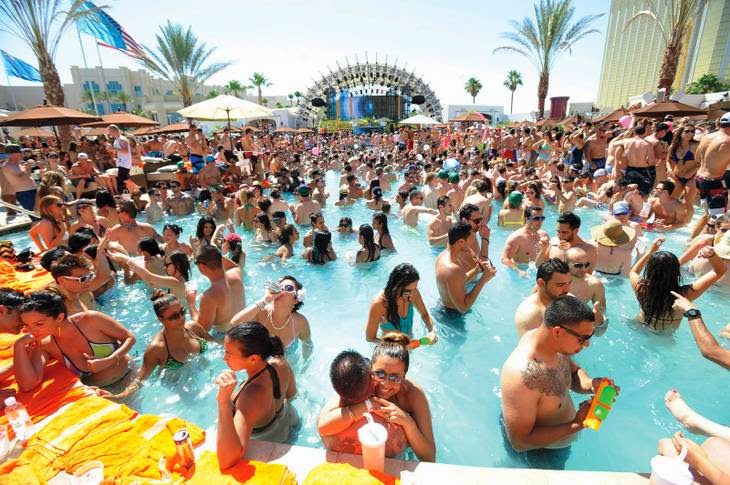 Number of Underwater Homeowners in Las Vegas Continues to Subside

Although Las Vegas is still in the lead with upside-down borrowers in comparison to other major metro areas, numbers have improved greatly for Southern Nevada over the past two years.  Rising property values have helped many local homeowners escape their negative equity, as shown by the latest numbers.
According to a new report from Zillow, almost 34 percent of local homeowners with mortgages were underwater in the first quarter of this year.  This number dropped from 48 percent a year earlier, and from a peak of 71 percent two years ago.

Link to the article:
http://www.vegasinc.com/business/real-estate/2014/may/19/number-underwater-homeowners-las-vegas-continues-s/ 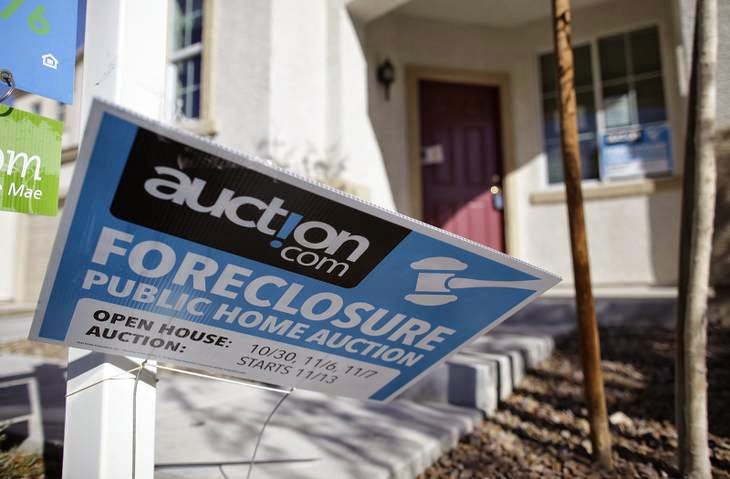 Could this be the First Major Pro Sports Team to Call Las Vegas Home?

Justin Findlay and Cordish Companies have joined together in the hopes of building a 24,000-seat soccer stadium at Symphony Park in downtown Las Vegas for a Major League Soccer franchise to call home.  The $300 million project was announced Wednesday, and will be proposed on May 21 to the Las Vegas City Council.  With all the talk Las Vegan locals hear about pro sports teams and venues coming to Vegas, Findlay aims to step in and finally make one of these visions a reality. "I really believe Las Vegas deserves it," he told the Las Vegas Review Journal. 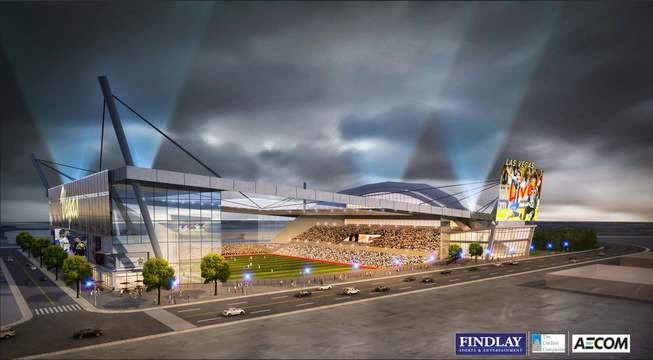 Major League Soccer is expanding from 19 to 24 teams by the year 2020.  Four cities have already received new franchises, so Las Vegas is in competition with five different cities for the final spot. According to Findlay, "It will be a race to see who can put the best package together."

Bringing a pro sports team to Vegas has long been a dream of Mayor Oscar Goodman and the city of Las Vegas. Goodman and his wife Carolyn have made efforts to bring an NBA or NHL team to the city, but nothing has materialized. Carolyn called the pull for a pro sports team "Oscar's passion", saying, "There are three parts to any great city. It's your medical, it's your cultural, it's your sports. That's something he knew."

Findlay believes that all we're missing is sports, and he's determined to change it.  See above images for an artist's rendering of the proposed Major League Soccer stadium to be located in Symphony Park.

Source: LASVEGASSUN.com
at 10:16 AM No comments:

According to Freddie Mac's most recent weekly mortgage rate report, the average interest charged to borrowers for a 30-year, fixed rate loan fell to 4.21%.  This was down 4.29% from the week earlier, and marks a new low for 2014 mortgage rates.  As shown in the graph below, the 15-year fixed rate mortgage also dipped from 3.38% to 3.32%.

While the mortgage rate drops are nice for buyers in the market, they demonstrate weak economic recovery for our country which is reflective upon U.S. Treasury bonds.  In combination with strict lending standards, the positive impact of these low rates on the recovery is rather limited.  Those with unsatisfactory credit who wish to buy still cannot do so without obtaining the proper financing. 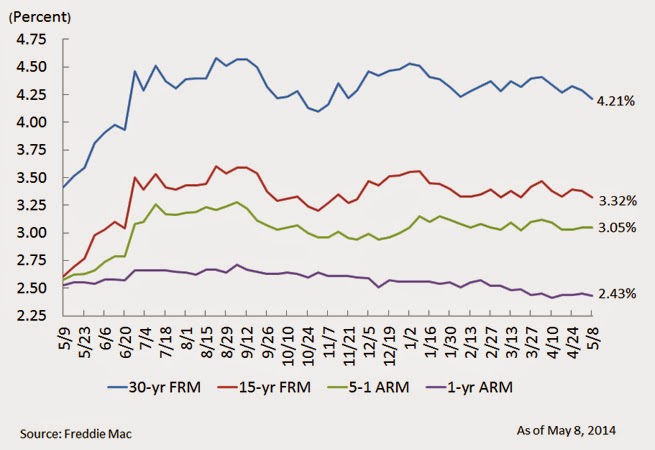 Photo: SHUTTERSTOCK.com
Source: FREDDIEMAC.com
at 10:05 AM No comments:

Nearly Half of All Home Sales All-Cash Deals

According to RealtyTrac, 43% of home sales during the first three months of 2014 were purchased in all-cash.  This was up 19% from one year prior, and has set record as the highest level reported since RealtyTrac began tracking deals in early 2011. 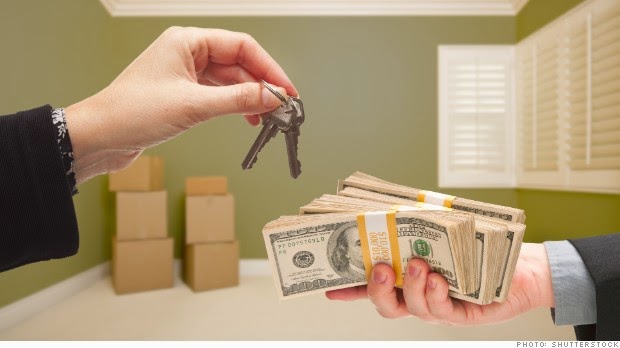 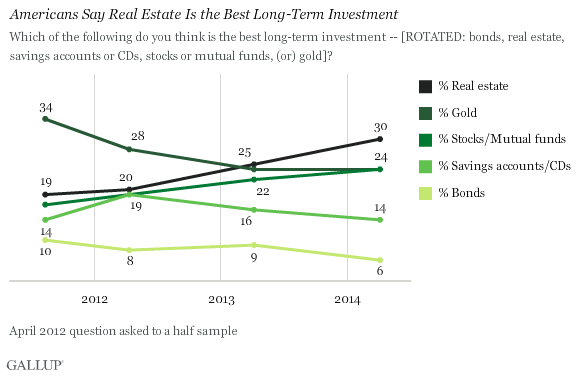 According to recent numbers from the U.S. Department of Labor, job growth in the construction industry and metro areas hit particularly hard by the housing collapse continues to outpace overall growth.  Las Vegas led the pack of metro areas and saw a 3.6 percent increase year over year in March.

On the other end of recent employment data, the job rate for young adults has not fared so well lately.  Employment among 25-34 year-olds dropped slightly in April, and is still below the rates that ranged prior to the housing bubble.  Young adults play a vital role in the drive of housing demand, suggesting that this data reflects notably upon the current housing market.

Link to the article:
http://www.inman.com/2014/05/02/jobs-data-offers-mostly-positive-outlook-for-housing/#.U2pYWK1dXuA 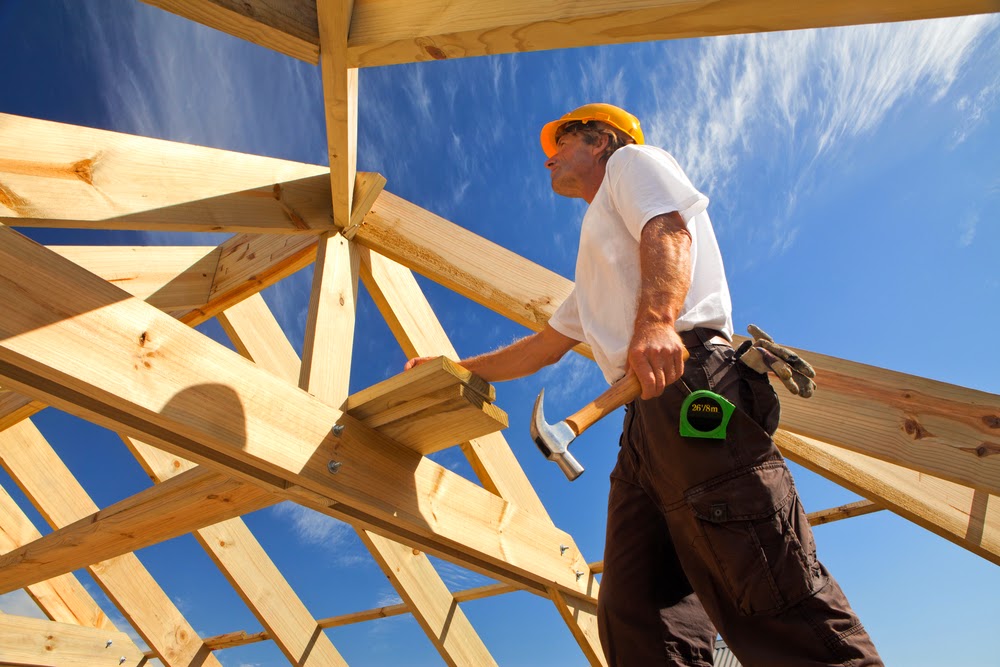 Photo: SHUTTERSTOCK.com
Source: INMAN.com
at 10:22 AM No comments:

Data from a new housing appreciation map courtesy of SalesTraq shows that home values in every local ZIP code increased on average in 2013.  All but one of these ZIP codes showed double-digit percentage gains, with values in 89107 seeing the highest rise with a 53.2% gain.

For local homeowners, this widespread appreciation continues to offer broad economic benefits in every area code.  The financial profile of Vegas Valley homeowners has improved greatly as market stabilization is allowing many homeowners to rise beyond their underwater mortgages.

Thanks to such healthy appreciation, consumers are feeling better about their personal finances as well as the economy as a whole.

Read more at the article:
http://www.reviewjournal.com/business/rising-tide-lifts-all-homes 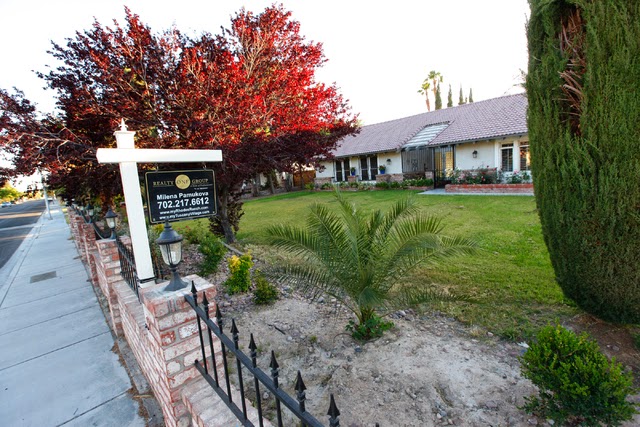 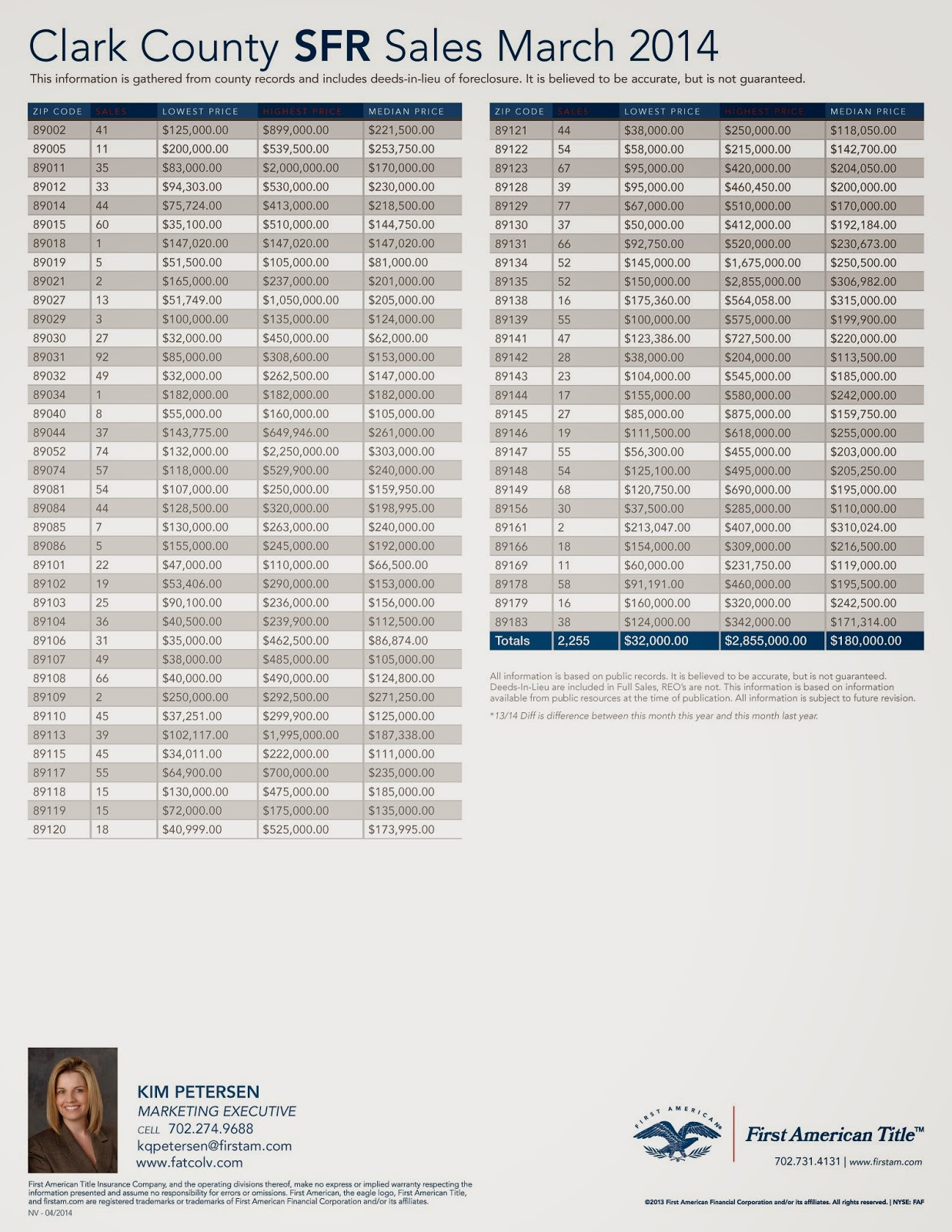