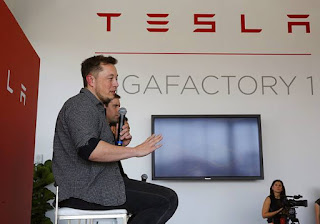 According to a recent Las Vegas Sun article, in a recent meeting with Governor Sandoval, he discussed Telsa's impact thus far and the future impact. He also noted that it wasn't just about Telsa. Telsa will soon be one of many companies that the Governor hopes to relocate to Nevada. The factory is currently 14% completed and the biggest impact has been the increase in the number of construction jobs. Elon Musk did explain that he believes about 10,000 employees could work at the site in the future.


The article makes a great point that “If Tesla went to Austin or if Tesla went to Charlotte, people probably wouldn’t have been too surprised. When people announced Reno … everyone went, ‘Reno'? What the heck is Reno?’” Kazmierski said. “We didn’t have a brand that was associated with advanced manufacturing or with industry.”
Telsa seems to have done a good job with working with the county they are located in. "Tesla has paid in excess of $1 million to Storey County to help offset added costs to government services, according to Pat Whitten, the county manager. The county recently bought a $750,000 ladder truck so firefighters could reach the top of the Gigafactory in an emergency."
“The partnership between Nevada and Tesla set into motion the creation of thousands of new jobs and developed opportunities for existing businesses with an infusion of millions of dollars into our economy,” Sandoval said in a statement this week. “It also helped revive our construction industry with a surge of new long-term jobs and refocused our local trades to prepare for the demands of the future.”
Want to read more? Check out the 3 Takeaways from Telsa Gigafactory Unveiling.