Las Vegas on Pace for Another Record Year 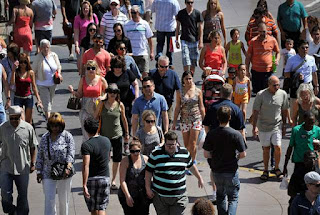 According to a recent Review Journal article, "convention attendance continued to soar in April, keeping visitor volume for the month in positive territory compared with last year, the Las Vegas Convention and Visitors Authority reported Thursday."
"The authority reported 3.544 million visitors for the month compared with 3.540 million in April 2015, a 0.1 percent increase. The city is on pace for a record year, 2.6 percent of 2015’s pace for the first four months of the year. At the end of April, the authority reported 14.1 million visitors."
"Although the number of passengers at McCarran International Airport was up 3.4 percent to 3.9 million, the amount of traffic on Interstate 15 from California dropped 7.1 percent, according to the Nevada Transportation Department."