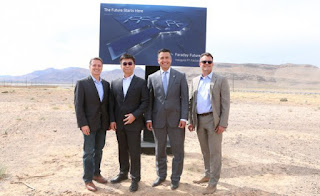 According to a recent Review Journal article, Faraday Future broke ground on it's North Las Vegas electric car plant last week. Governor Brian Sandoval was one of the speakers for the event. Faraday Future is one of many projects that he has been working on to help diversify Nevada's economy. "More than 200 people attended the ceremony where a model of the 3 million-square-foot factory was unveiled. Among them were North Las Vegas Mayor John Lee and Clark County Commissioner Steve Sisolak."
Sandoval called the project “The next chapter in the Nevada story” and a “new beginning” for Southern Nevada, North Las Vegas and the Apex Industrial Park, where the factory will be built.
As stated in the article, "Lawmakers approved $215 million in tax incentives in December to draw Faraday to the state. The company has set a goal of building cars as early as 2017 and hiring 4,500 employees with an average wage of $22 an hour as part of the deal." On Wednesday, Faraday Future spokeswoman Stacy Morris said the company expected to be producing cars “in the next couple years.”