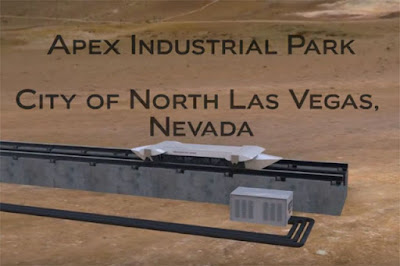 According to a recent Review Journal article, another transportation company has submitted plans to create a full-scale test site at the Apex Industrial Park in North Las Vegas. Hyperloop Technologies is a Los Angeles based company that broke ground last month on a 50 acre site to build a smaller test site in Apex Park. For 2016, this could create 60 to 80 jobs in construction and engineering. They hope to begin testing in April with an open-air prototype that would reach speeds of 400mph. If they are approved for the full-scale test site, they could be testing the prototype on a 2 mile track by the end of the year.
"That's a moment the world will be watching," said Lloyd.
"The premise of this "fifth mode of transportation" involves transporting people or cargo in levitated capsules through tubes at speeds up to 750 mph. At such speeds, a Las Vegas-Los Angeles trip could take under a half hour. Lloyd said the company is focusing on both freight and people. The technology could alleviate traffic in cities and make the process of moving cargo more efficient, said Lloyd."
"The company expects to be commercially ready by 2021, and hopes to identify three initial routes by 2017. Lloyd said Wednesday that the company is looking nationally and internationally. The company has raised $37 million so far and is in the process of closing another round of funding that would cover the costs of testing it full-scale, Lloyd said."
With Faraday Future and now Hyperloop Techonologies, North Las Vegas is starting to become a high-tech transportation hub and could possibly attract more companies to start or move in the future.

Check out a recent CNN video talking about the Hyperloop test track.